As India's most read business daily and the world's second most (after the Wall Street Journal), you cannot ignore the Economic Times. And two weeks back it put out this cover for its weekend magazine:

Written by two of its well-regarded feature writers, Rahul Sachitanand and Suman Layak, the article argued that there is a "bubble" building up in India's early-stage startup space.

Notwithstanding a curious choice of experts for an article about Indian startups (US-based Rahul Sood, former VoodooPC founder and now head of Microsoft Ventures and US-based startup advisor Sramana Mitra who charges startups $1000 a year to become premium members of her "1M/1M" program that aims to "virtually incubate" 1 million startups with $1 million in revenue), the report does a great job of nailing the symptoms that plague Indian startups.

Too many accelerators leading to a situation where some may shut. Standlone accelerators are an unviable business.

Too many mentors/angel investors who have the cash, but little startup experience

There's meaningful advice and observations too, like from Alok Kejriwal (who, though a friend, I refuse to call 'Rodinhood'!).

"In India, the ecosystem is the wrong way around," he says. "While traditionally you exhaust every source of possible funding and then to go angels, here we have start-ups focusing on funding from slide number two or three of their presentations."

Unfortunately after having identified all the symptoms and most of the causes, the article allows Microsoft's Rahul Sood to paint over a complex and evolving space with a broad brush.

"Mostly half-baked, with no customer validation," (Rahul Sood) said later, and even told ET Magazine in an interview that India is probably seeing an entrepreneurship bubble that may collapse even if it doesn't go completely bust.

As a recent and first-time entrepreneur, I understand I may be biased but I'd argue that 'solution' is exactly the opposite - we need more entrepreneurship!

The Common Admission Test, or CAT, is the gateway to India's most prestigious MBA colleges. Over 173,000 students took the test last year, with some having attempted it three years in a row.

It would thus appear that the MBA degree is a guaranteed path to success in India. Which is why this Financial Times article (behind a paywall) will be sobering reading.

Now consider the fact that a two-year residential MBA program at one of the better known colleges in India can "cost" most students around Rs.40-50 lakhs (~$70,000-80,000). In return they get some variant of this:

And after two years when the graduates finally land a comfortable and cushy corporate job where they can finally apply all that fancy knowledge and take the escalator to the boardroom what do they find on their desk? 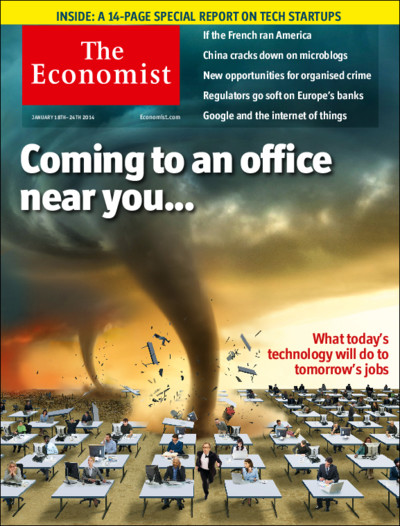 Blowin' in the Software Wind

When the Economist, a magazine not known for needless metaphors or effusive hyperbole, calls something the second coming of the "Cambrian Explosion", you tend to take notice.

About 540M years ago something amazing happened on planet Earth: life forms began to multiply, leading to what is known as the “Cambrian explosion”. Until then sponges and other simple creatures had the planet largely to themselves, but within a few million years the animal kingdom became much more varied.

This special report will argue that something similar is now happening in the virtual realm: an entrepreneurial explosion. Digital startups are bubbling up in an astonishing variety of services and products, penetrating every nook and cranny of the economy. They are reshaping entire industries and even changing the very notion of the firm. “Software is eating the world,” says Marc Andreessen, a Silicon Valley venture capitalist.

I would recommend anyone who is remotely interested in the future of work, commerce or entrepreneurship to read the special report in its entirety.

But here's the part for those considering an MBA:

Economic and social shifts have provided added momentum for startups. The prolonged economic crisis that began in 2008 has caused many millennials—people born since the early 1980s—to abandon hope of finding a conventional job, so it makes sense for them to strike out on their own or join a startup.

A lot of millennials are not particularly keen on getting a “real” job anyway. According to a recent survey of 12,000 people aged between 18 and 30 in 27 countries, more than two-thirds see opportunities in becoming an entrepreneur. That signals a cultural shift. “Young people see how entrepreneurship is doing great things in other places and want to give it a try,” notes Jonathan Ortmans of the Ewing Marion Kauffman Foundation, which organises an annual Global Entrepreneurship Week.

Tempting as it might be to write off this trend as the byproduct of a jobs shortage in developed countries, that would be a short-sighted and lazy conclusion. Because the same trends are going to visit countries like India sooner than you think, thanks to the network effects provided by the Internet to software startups.

Over the next decade a host of careers ranging from management to law to advertising to journalism are going to be disrupted by software startups. And the MBAs in most cases are going to find themselves as incumbents in denial, unwilling to unlearn and retool themselves, even as their less pedigreed peers adapt.

Instead, they should consider a second MBA.

Entrepreneurship IS the new MBA

By now there would be very few people who haven't heard Marc Andreessen's prophecy that "software is eating the world".

And in that post-software world, first-hand entrepreneurship experience is not only way more valuable than an MBA, it is also quicker and cheaper to obtain.

I completed my MBA in 2001 just as the first "dotcom bubble" was about to burst. But in just over a decade since then, the ground has shifted in terms of how startups are conceived, built and scaled.

At the core of this approach lies the concept of "Lean Startups", a collection of principles that drastically reduces the costs, risks and time taken to build a new business.

Emphasizing an engineering-led mindset (think processes and checklists), the "lean startup" methodology turns around many conventional (and MBA) notions of building a business. These include:

While this may sound common-sensical, even mundane to those working in software companies, I would recommend it as mandatory mid-career reading to all MBAs (and middle-managers feeling "trapped").

Here's a 2011 post by Eric Ries (whose book "Lean Startups", along with Steve Blank's "The Startup Owner's Manual", are the twin bibles of the lean startup method):

It’s a common refrain around Silicon Valley to disparage the role of MBA’s in entrepreneurship. We still have some collective scar tissue: the idea conjures up the hordes of dot-com hopefuls that descended on VC’s and angel investors with little more than a business plan. Even today, I routinely hear MBA’s advised to remove the degree from their resume when applying to startup jobs. We also cavalierly lampoon the “suits” that get brought in to run startups after the founders are fired by callous VC’s. I used to call them “executioners” because their attempts to “execute” the standard general management playbook in the startup context of extreme uncertainty usually led to disaster.

But I think the root cause of these mistakes is the fact that most MBA’s are not adequately educated about entrepreneurship. The problem afflicts general managers who try to innovate within big companies, too. In fact, I hope longtime readers will recognize these as the exact same mistakes that afflict us as entrepreneurs when we try to hold ourselves and our teams accountable. Are we making progress? Is what I’m working on creating value? What should I work on next? These are the enduring startup questions.

Unfortunately most MBAs are comfortably ensconsced within the safety of their high-paying corporate jobs, oblivious to how fast software startups are disrupting their careers and employers.

Here's a thought to those considering an MBA today - instead of investing $70,000-80,000 on a classroom education over two years, why don't you "spend" even half of that by working for a startup? Start one yourself, if you've got an idea and the drive. Else join a web or early-stage startup.

And if you're already an MBA, challenge yourself to become a "growth hacker" or "full stack marketer".